The spagyric tincture from Charmomile. The result with a with a Golden yellow color. 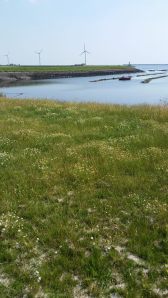 Here we picked the fresh Chamomile at July 17th 2014

Since I posted it on my blog I used the Chamomile daily to test it. I took 10 drops in the evening and 10 in the morning. It seems when I take it before sleep it induces very vivid visual images and nearly to lucid dream states. The first night just before I fell asleep I could mould images to my will when they came up. That will say, I could reshape then in whatever image  I wanted. Later this week my dreams were intensely vivid  and deep when it comes to images and the impacts of them. Also as expected the tincture helps to calm down the whole physical system and mainly the digestion but it has an interesting impact on my inner world. I have to say I really have a good resonance with this herb and this tincture (also since it is related to the Sun and my birth sign is Leo also ruled by the Sun). The state of calmness is from a very different kind compared to the state of calmness induced by Valerian. I didn’t expected that it induces, in my case, that intense visual effects. Ora et labora!

One thought on “Effects Chamomile on my system.”